Minecraft houses are one of the many things you should build in the game. Building your house is a great way to store items and set your spawn-point with a bed.

Most houses in Minecraft will include storage rooms and rooms for sleeping. To make things more fun, I like to include some extra rooms in my house just for “decoration”, for example a cool Minecraft kitchen or even a great library.

I have put together the very best Minecraft house ideas for both beginners and advanced players and I hope you find it helpful! 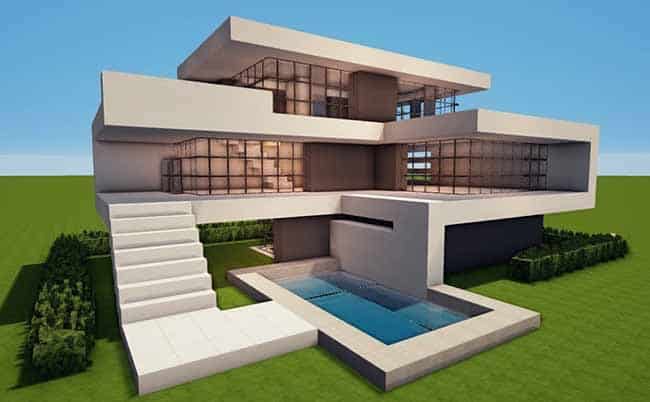 This modern house by WiederDude is a fantastic example of a Minecraft house! It packs a lot of “wow” into a small area, making it a great choice for survival.

Modern houses in Minecraft usually have lots of glass, white colors, pools, multiple floors, and staircases. This house is a good example and includes these elements. For the building blocks, usually wool, quartz, or blocks like concrete are used. Quartz is often the best because you can also make staircases and slabs with it.

Some of my tips when building a modern Minecraft house are to use plenty of glass to provide natural lighting, use asymmetrical shapes, and to include big “open concept” spaces.

This sandstone mansion by Jar9 is pretty large so it might be a challenge for survival Minecraft. Regardless, it’s a stunning example of a large mansion in a warm climate with palm trees!

When building a mansion, don’t forget to use multiple floors with grand staircases and room for your Minecraft garden built outside!

I just LOVE this modern villa on the lake by Akila Gaming! And the best part? This build has a tutorial video (shown above) to help you build a similar house all by yourself.

Everything about this build is stunning: the huge glass windows and natural lighting, the choice of decorations and furnishings, and last but not least the waterfront lake (which would be great for fishing in Minecraft!) 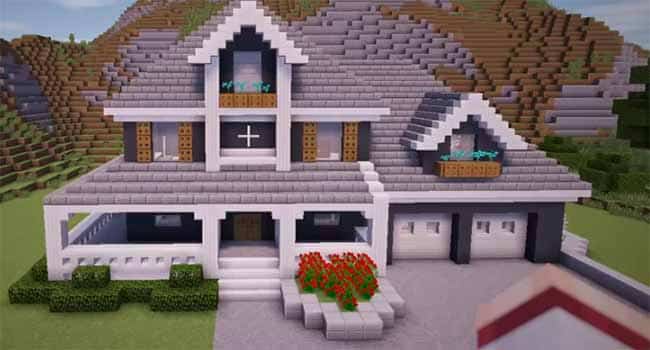 Most suburban American and Canadian homes have an attached garage, which definitely adds to the “real life” feel of the home. Even though there are no cars in (non-modded) Minecraft, the garage can still be used as a storage area.

To make a scale version of a real-life suburban home, you probably would have to make a much wider and taller building to be able to include all the rooms, hallways, bathrooms, the kitchen with a pantry, and so on! 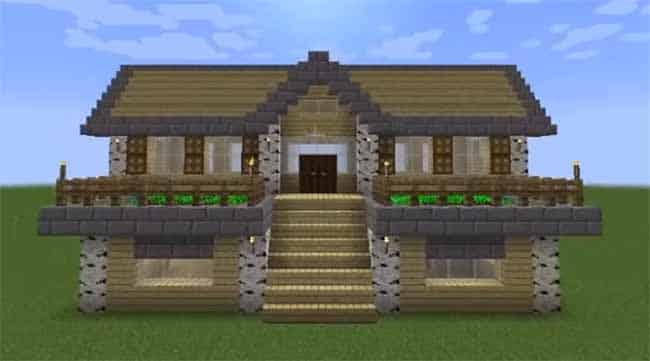 A birch survival house by Shock Frost, which is a great example of a “starter house”. It’s not too big and uses simple blocks (like birch wood), so this is something easy that almost anyone could build.

You will notice that the first floor is elevated with a staircase, leaving room for a balcony and a basement underneath. There’s alot you can do with the basement, but usually players will go for a Minecraft storage room.

The balcony is well-lit and has some crops growing on it. Any time you’re hungry, just do some farming and cook your food from your balcony!

This Minecraft modern mansion house by Rizzial is beautiful, simple, and also relatively easy to build. It features a pool in the front as well as an overhead balcony from the second floor. Note that the front entrance is actually on the sides rather than right in the front which adds to the uniqueness of this build.

The blocks used to build this mansion are not too complex and include glass, wood, stone, leaves, water, etc. This video obviously uses a custom texture pack, which makes the build look much better than it would in regular “vanilla” Minecraft.

If you want to give this one a try, the above video is a tutorial that shows you how to build it step by step. 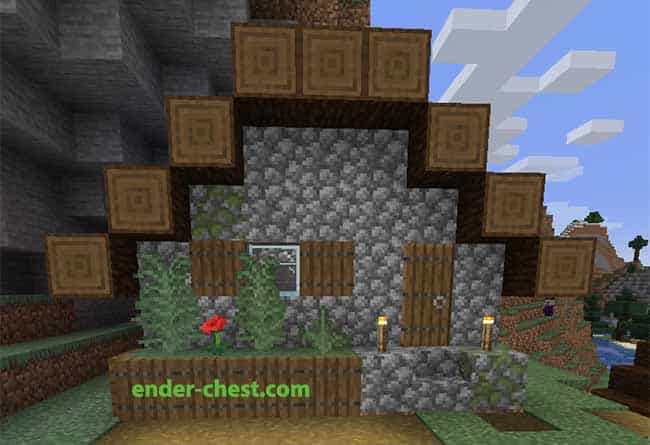 This is a Minecraft house from a naturally generated village in the game. The homes in villages can be a good starting point or example for how to build a simple house in the game.

The materials used in village houses are usually pretty easy to get. Things like cobblestone, wooden logs, wooden doors, and trapdoors. These types of houses are perfect for your “first days” when playing survival Minecraft. They aren’t exactly beautiful, but they get the job done and protect you from monsters.

Don’t forget that each Minecraft biome has different styles of houses! For example, villages in the desert will look different than villages in a forest.

This Minecraft forest house by Dazzly Craft is similar to a Woodland Mansion. My only dislike about this build is that I think there’s too many torches! I would suggest using a different light source like glowstone or redstone lamps if you have these materials as too many torches can look ugly and make the building look like it’s under construction still.

Wood is really common in the game, but you’ll probably want to have a tree farm to get all the wood for it. I would recommend getting an enchanted axe to increase the speed you can cut the wood at.

Since finding a Woodland Mansion in Minecraft can be pretty difficult, why not try building your own? A forest mansion like this one would usually be built somewhere in the middle of a forest and made primarily out of wood and a bit of stone. 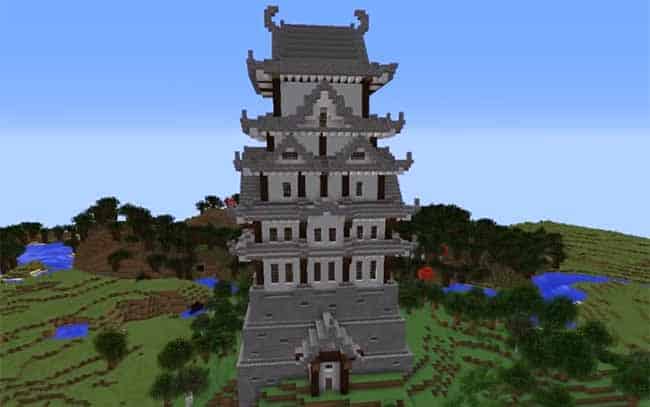 by [Source No Longer Exists]

An Asian themed Minecraft house can be challenging to build because of the angles and curves involved. You might find it helpful to install an Asian decorations mod to help you build with this Minecraft building style.

While this pagoda has many floors, you can also start with an easier one that is just a couple stories tall. Also consider adding a bit more color variety into the building, like shades of red or yellow, to make the building stand out a bit more.

If you search for a “pagoda” on google images, you will find tons of examples which you can use as a reference when building your pagoda styled house.

A beautiful Minecraft oak starter house by SheepGG in the forest with multiple levels for farming on the sides. This one is really not too difficult to build in survival and uses easy materials like oak.

An elevated house like this will look way better next to a hill or a forest as you can see in the video. If I built it in the middle of a flat field, it definitely would not look half as good!

If you want to give this mansion a try, the above video is a tutorial that shows you how to build it step by step. 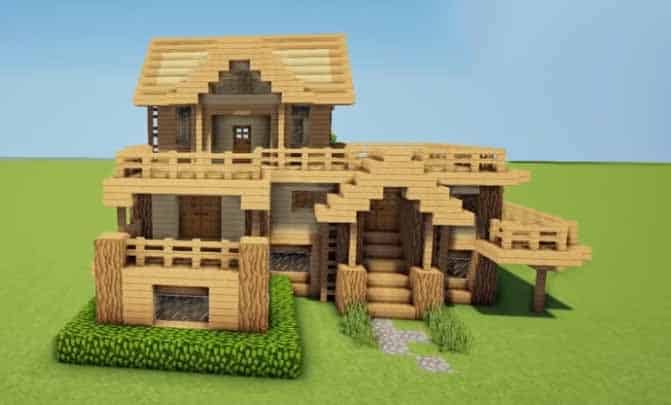 A multilevel starter house in Minecraft by WiederDude that’s both compact and practical. There’s a basement for a Minecraft storage chest room and a top floor for a bedroom.

A Minecraft house like this is quite easy to build and is best for beginners or players in their first few days of the game. Once you have advanced in the game and have access to more materials, you may want to consider building a bit larger or even a Minecraft castle! 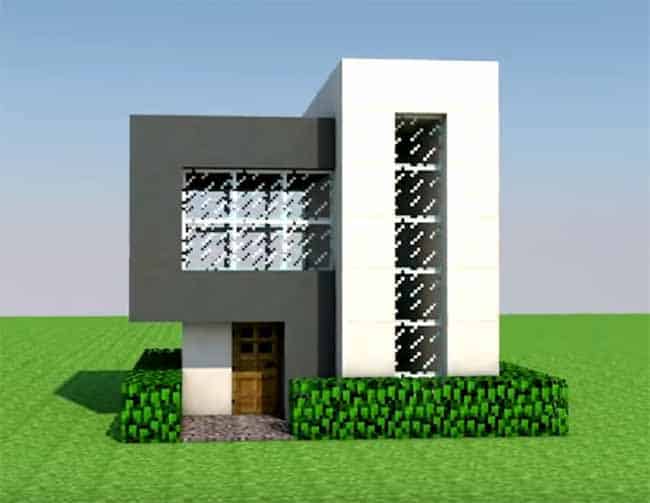 Houses that are Easy & Modern like this one by Drewsmc in Minecraft are getting popular, even in real-life!

Even though this Minecraft house is small, it still can be used practically. In my opinion, tiny houses are usually best for just an “outpost” place to safely sleep and grab some supplies like food. Another use example would be putting bookcases in and doing your enchanting inside.

If you’re using a Minecraft modpack, you could even add some cool furniture or decorations inside! Some examples could be a handing lamp or a small countertop. 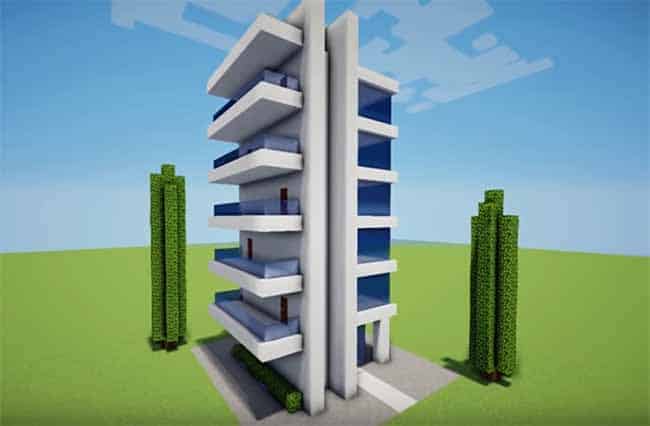 A very cool modern hotel tower by WiederDude, which can be used as a living space for multiple people. This Minecraft build makes use of blue stained glass to enhance the modern look and each unit has glass walls with an opposing balcony.

Taller towers can be built as a part of the city building survival Minecraft challenge.

A tall building with windows looks great with a view! Try to build a tower next to a scenic area like a beach or by a large valley.

Cool.i might post a creative house building next day!I love the builds expect one the"Asian house " Me and my sister tried building one but we messed up.its alright if we mess up because we all make mistakes.

nise i will bild it the ferst one

these coll houses gave me an idea of my new house in Minecraft.