Minecraft Biomes are all the different landscapes that together create the world map. Each biome has its own unique climate, terrain, plants, and animals. Some biomes are rarer than others and it is possible you may never see some of them in one gameplay.

Often players will need to visit specific biomes to get certain items, so we have created this guide to help you learn about all the different biomes. 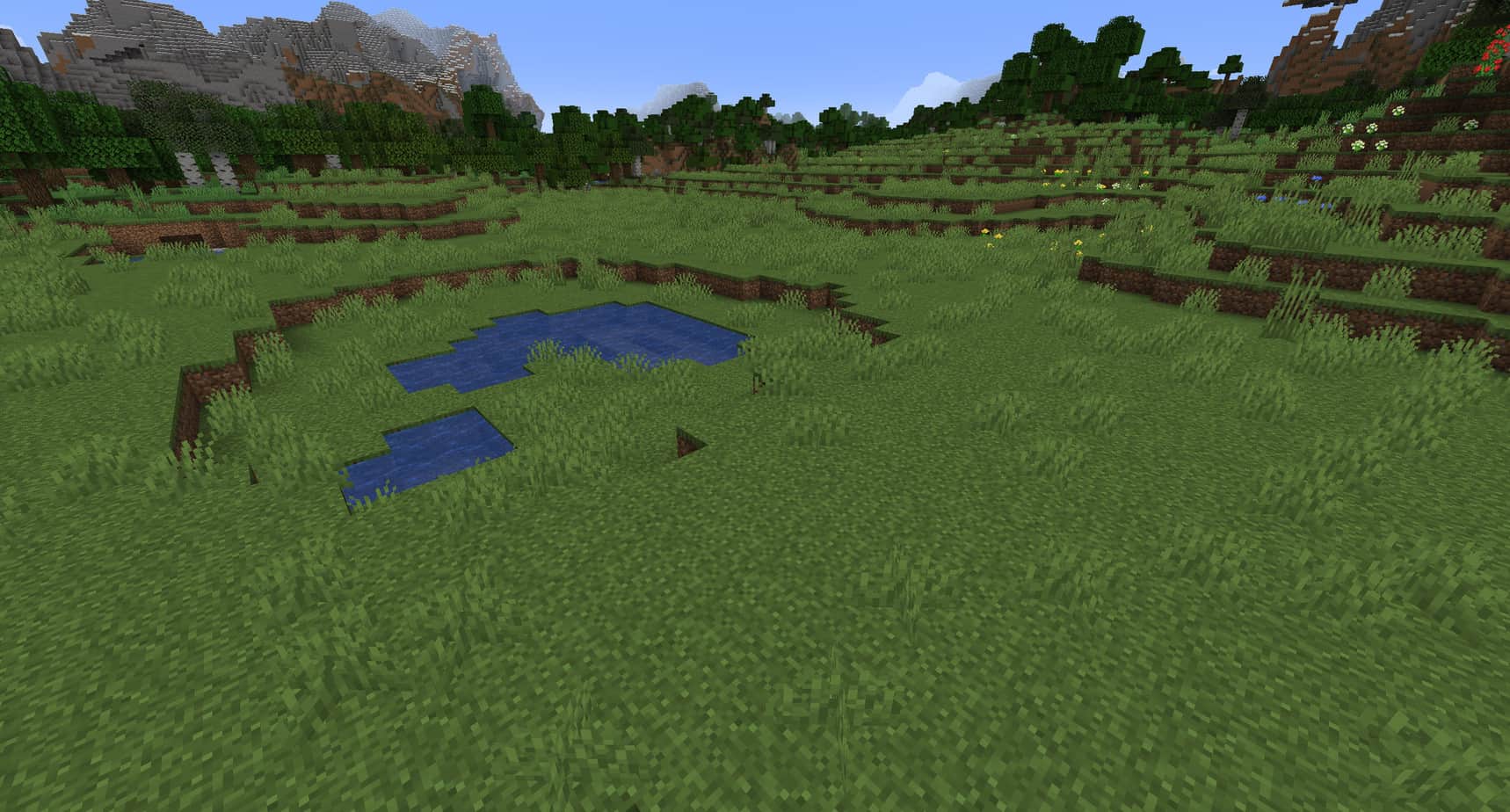 Plains are one of the most common biomes and are a good choice for building. The mostly flat land and lack of trees make it easy to bring your building materials and start a survival base here. Note that the lack of wood may make it harder to build your very first house though!

There is no shortage of animals with cows, pigs, and chickens being very common here. Farming the land for crops is also easier as it is flatter than other Minecraft biomes.

The plains biome can appear with a few different variations, including sunflower plains and wildflower plains. 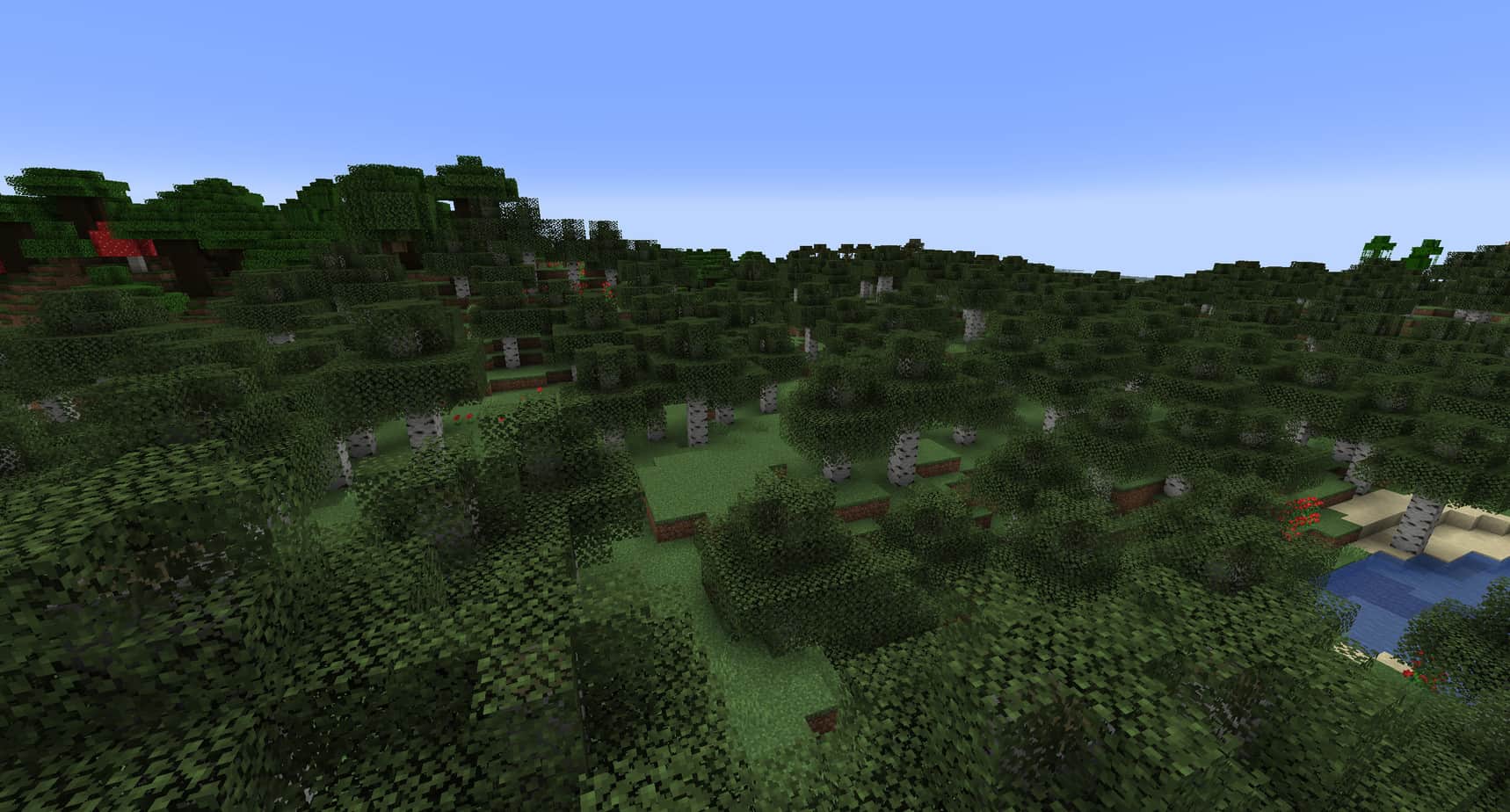 From the name, it’s easy to guess what this biome might look like. A forest in Minecraft is a green, grassy area filled with trees. They are an excellent source of wood, saplings, and apples before you get your first tree farm running.

Like the plains biome, forests can spawn with some variations as well. Variants include the dark oak forest and the birch forest biomes. These variants are similar to a regular forest, but spawn different types of trees (for example, a birch forest will spawn mostly birch trees instead of oak trees).

The dark oak forest biome is a bit unique in that it is the only biome that you can find woodland mansions and it also contains “mushroom trees”. The mushroom trees can be chopped down as an easy source of mushrooms. 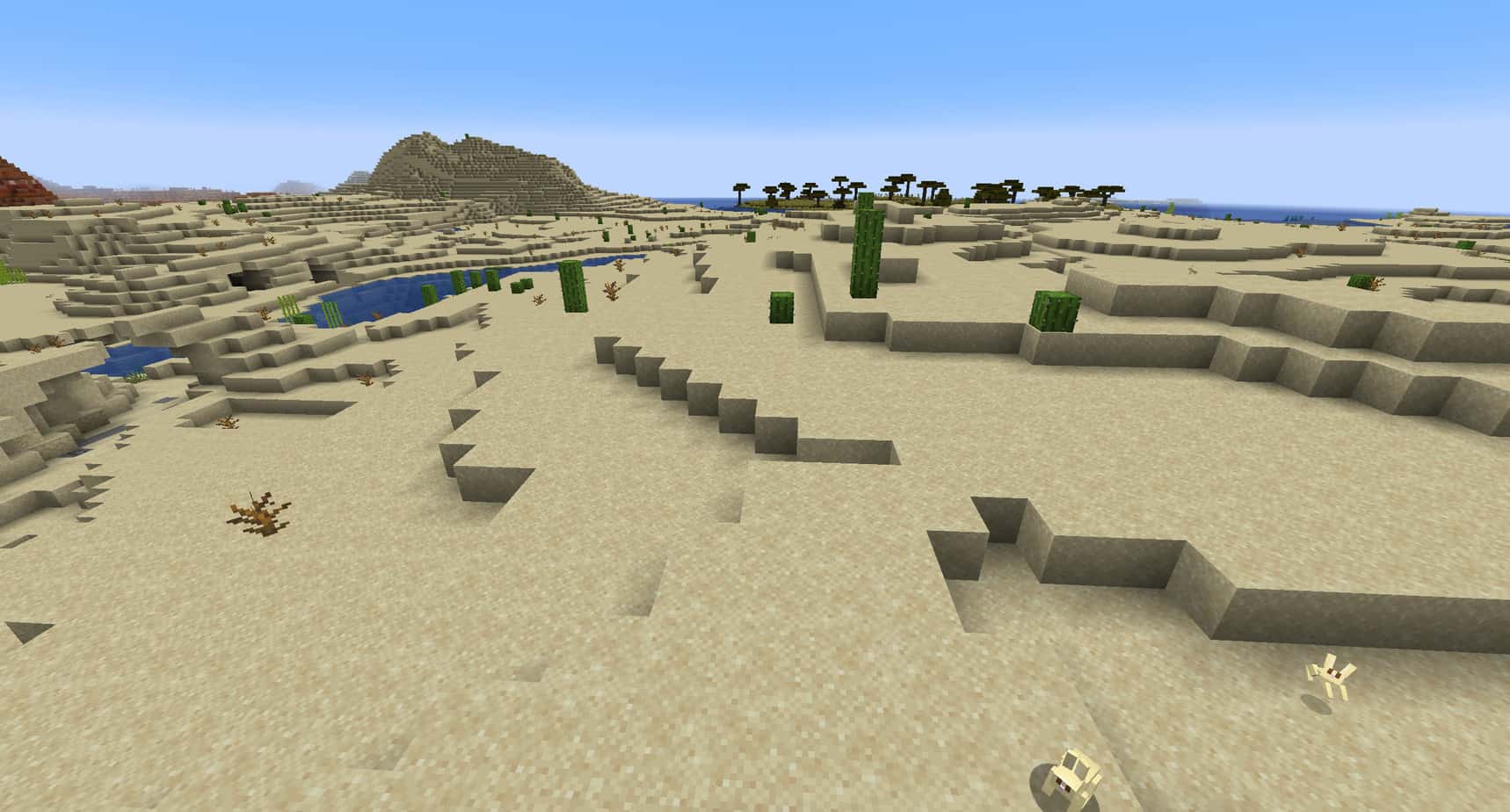 This is a warm, sandy, and somewhat lifeless biome. Deserts are one of the best sources of sand and sandstone in the game due to the sheer volume of sand located here. You won’t find trees or much water here, but you will find plenty of cacti and some dead bushes.

There are some structures that spawn specifically in deserts, such as desert pyramids and desert villages.

The desert can be a very dangerous place to wander at night. There are plenty of enemy mobs spawning, very few animals, and few places to hide or take shelter. 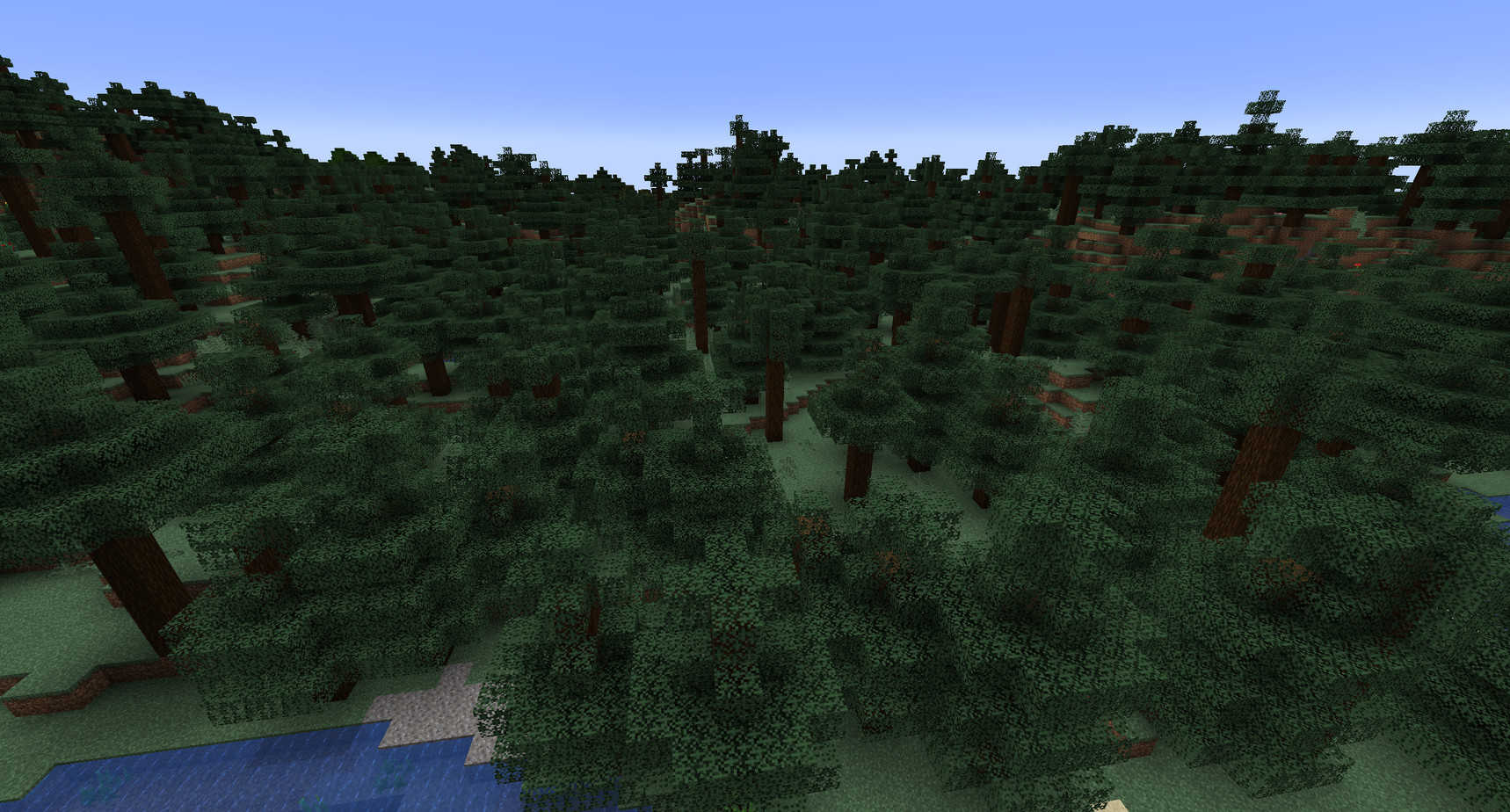 The Taiga biome is similar to forests, however you’ll find just spruce trees here instead of the more common oak trees. Overall, taiga has a more colder feel to it and resembles a more northern or mountain valley forest. 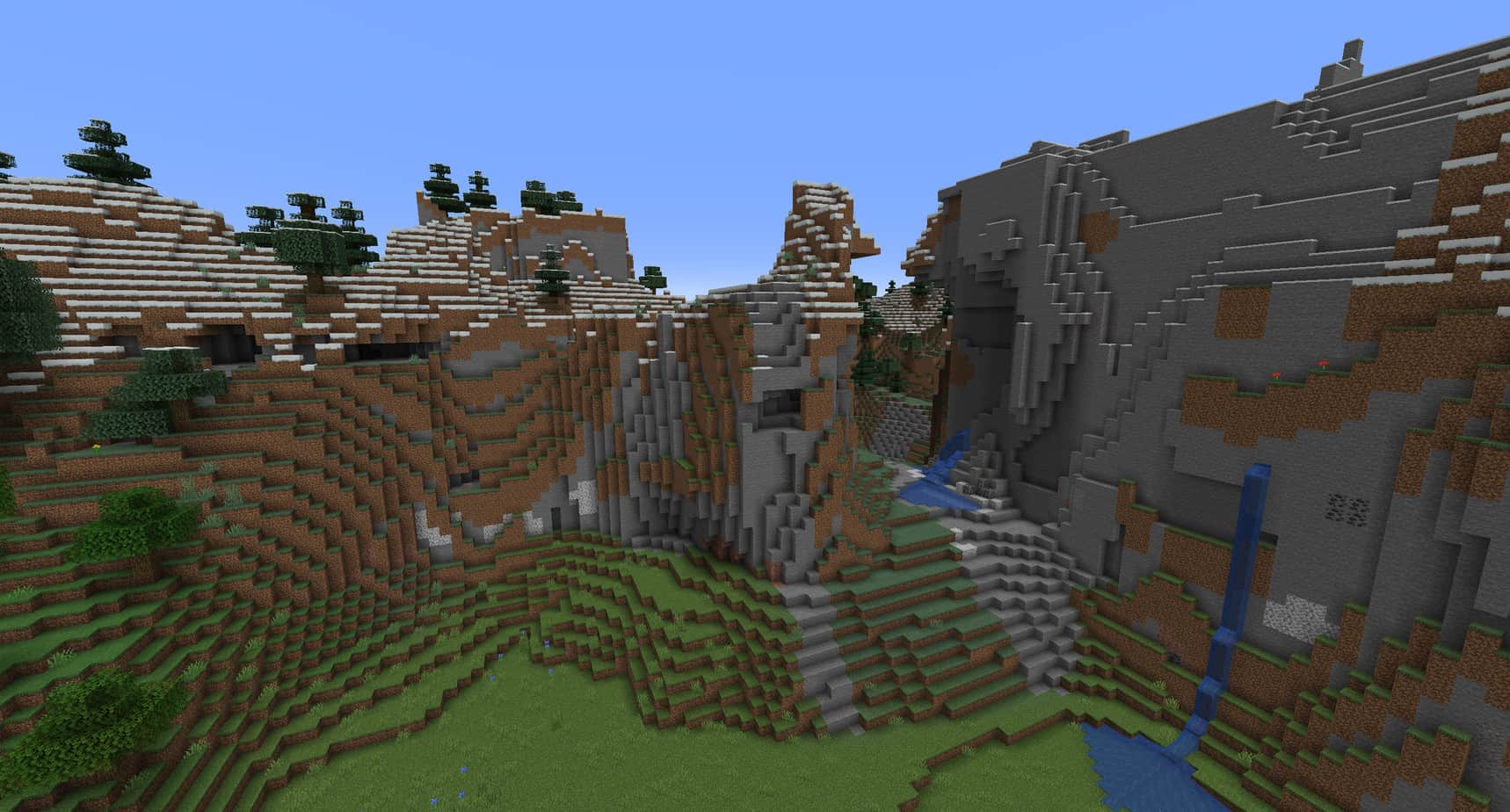 Like the name suggests, this biome is filled with towering, rocky, and snowy mountains. The 1.18 Minecraft Update (Caves & Cliffs) will bring significant changes to mountain biomes, including more realistic generation and more mountain biomes.

Current variants of the mountain biome include: gravelly mountains/hills (contains gravel on top layers) and wooded mountains (contains more trees). The 1.18 Caves & Cliffs Update will bring more variants such as meadows and significantly taller slopes. News about the 1.18 update can be found here. 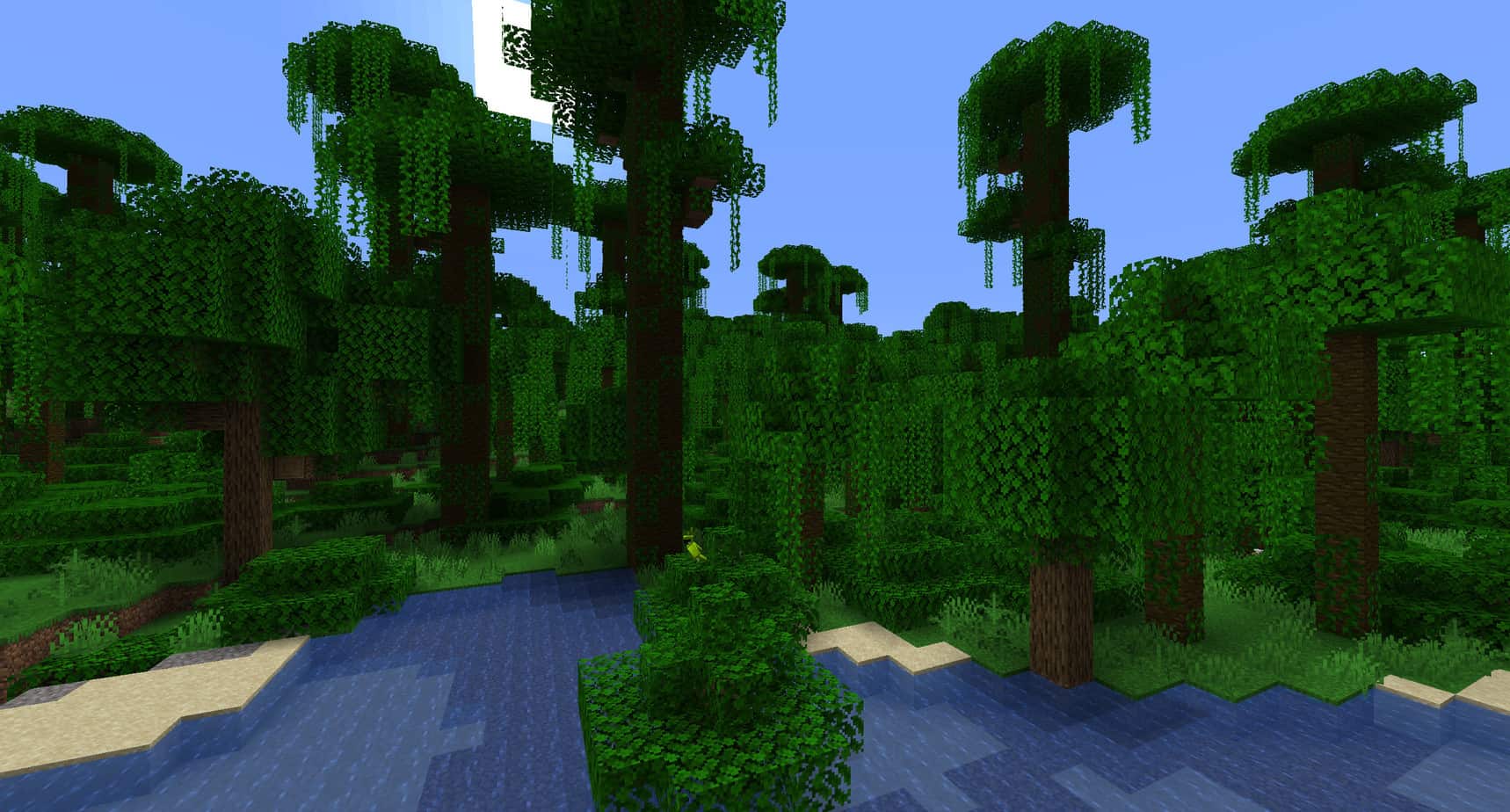 The jungle biome is very thickly forested with tall trees and hanging vines. This biome is a great choice for a treehouse survival base!

Here, you will find a lot of unique things you won’t see in other Minecraft biomes. This can be frustrating at times since the jungle biome is not especially common and can take a while to locate sometimes. Unique animals including parrots, pandas, and ocelots only spawn in Jungle biomes and plants including cocoa, bamboo, and vines can also be found here.

Sometimes you will also stumble across a jungle temple, which is an aztec-themed structure made of mossy cobblestone and vines. Inside you’ll find traps that shoot arrows at you as well as treasure chests. 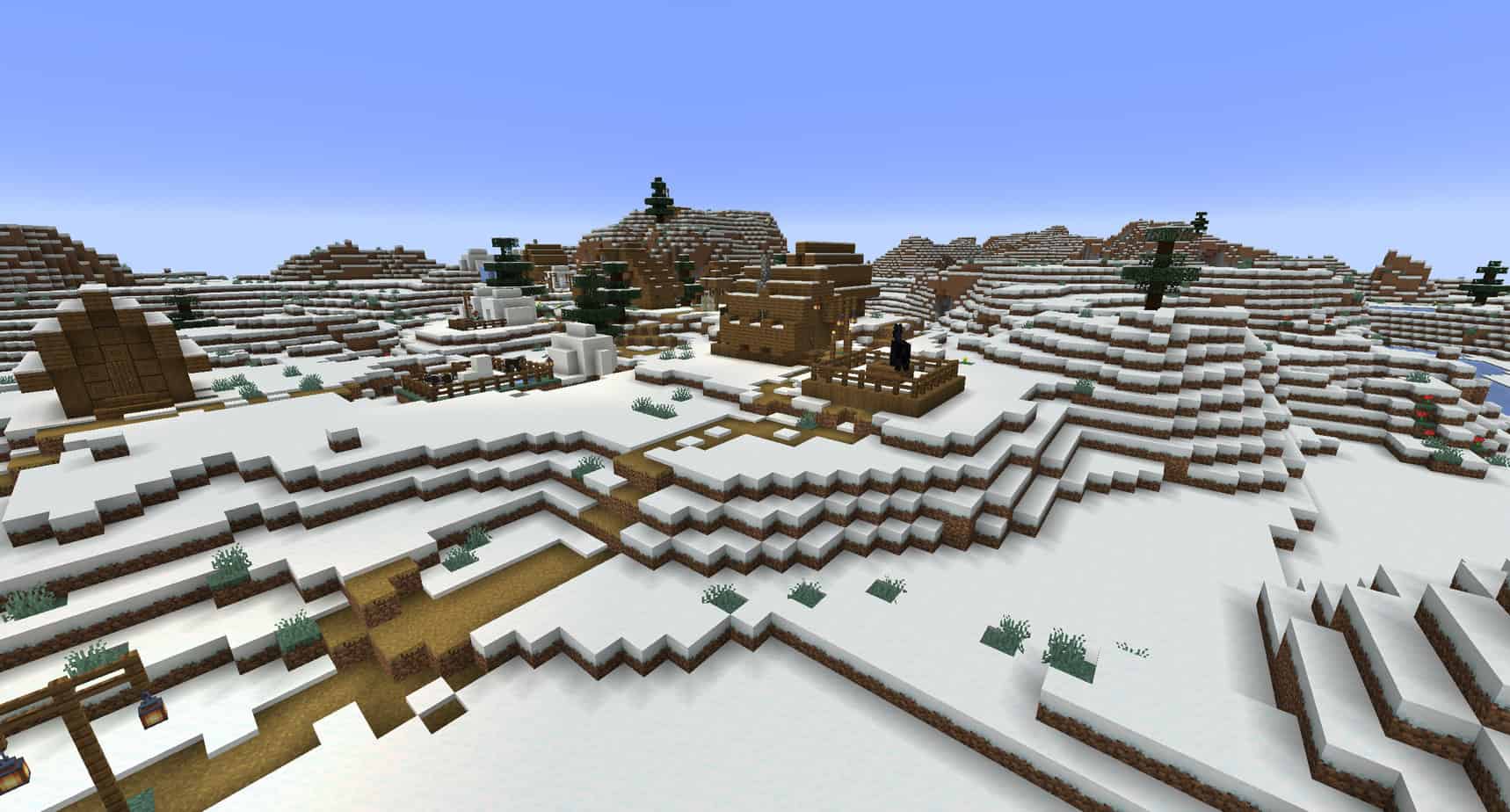 Snowy Tundra is a cold biome with a northern climate. Here you will see lots of snow, frozen lakes or rivers, igloos, and polar bears. Luckily, you can’t freeze to death in Minecraft, so it’s still a suitable place to live.

Variants of this biome include: ice spikes (lots of icy spikes on the land) and snowy mountains (steeper terrain). 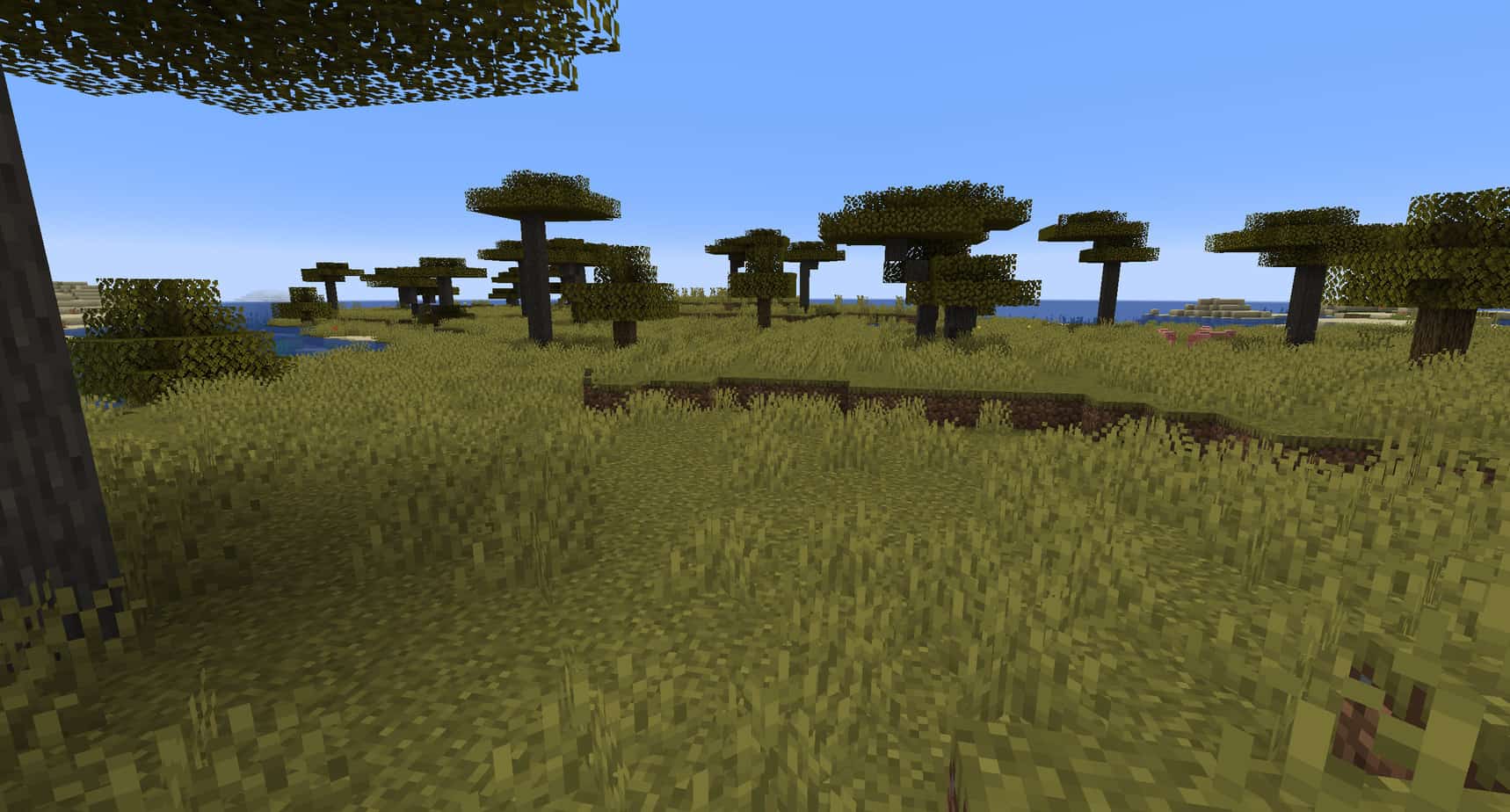 This biome reminds me of the type of land you would see lions and elephants roaming on, but you won’t find these animals in Minecraft (yet). Instead, llamas, donkeys, and horses can be found here. Savannah is similar to plains, but with acacia trees and overall a more “dry” appearance.

If you want acacia wood, this is the only biome you will find it in! 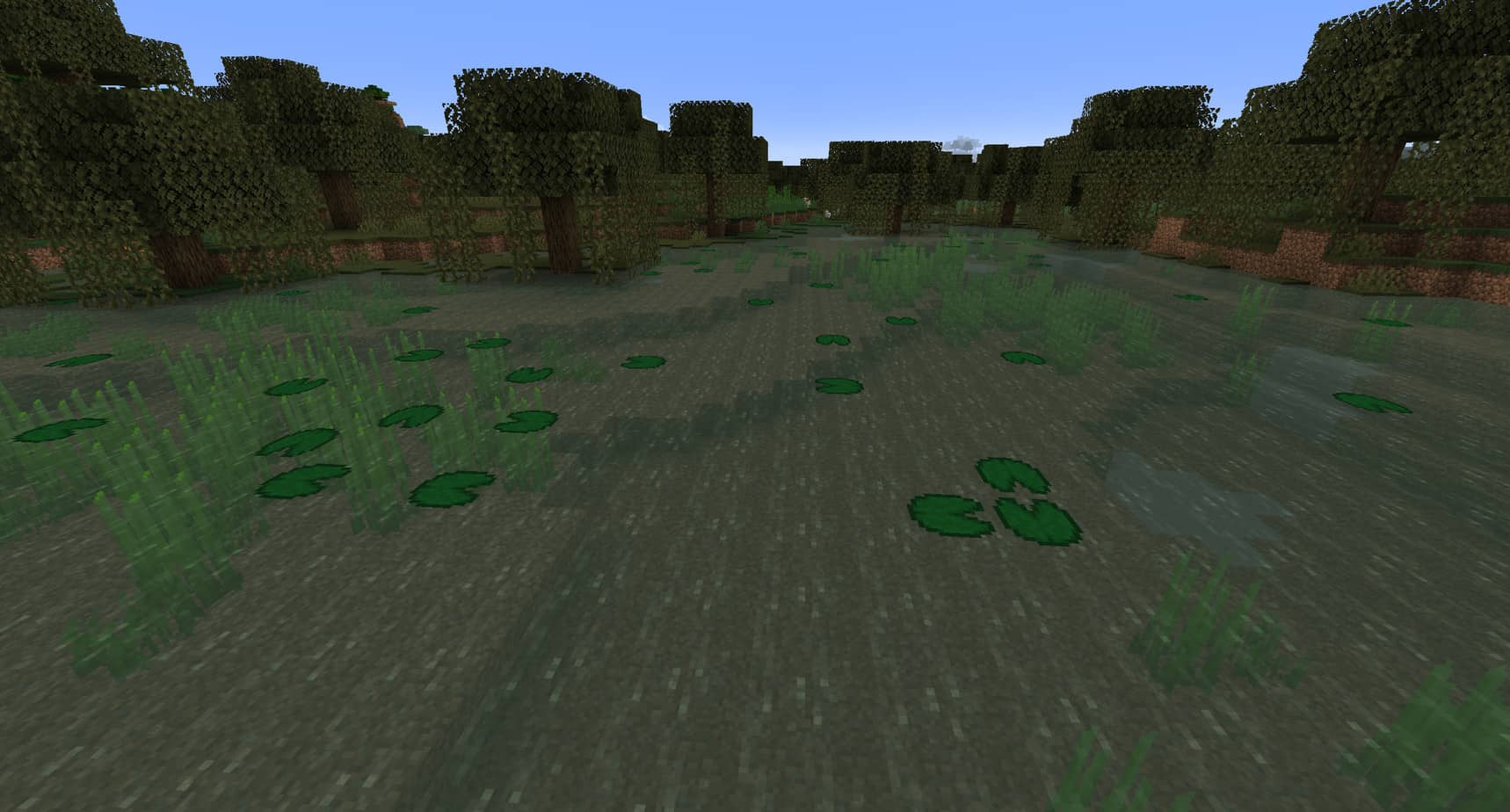 A swamp is exactly what you would expect: a marshy, wet, mysterious, and overgrown land. This is the biome you’ll need to find if you are looking for a swamp hut, which is home to the witch mob.

Swamps are a good source of clay in the shallow lakes and can also spawn fossils. Slime is also easier to obtain in this biome, as swamps are the only biome where slime mobs can spawn above-ground.

As with most other Minecraft biomes, the swamp can also spawn in a hill variant that features steeper terrain. 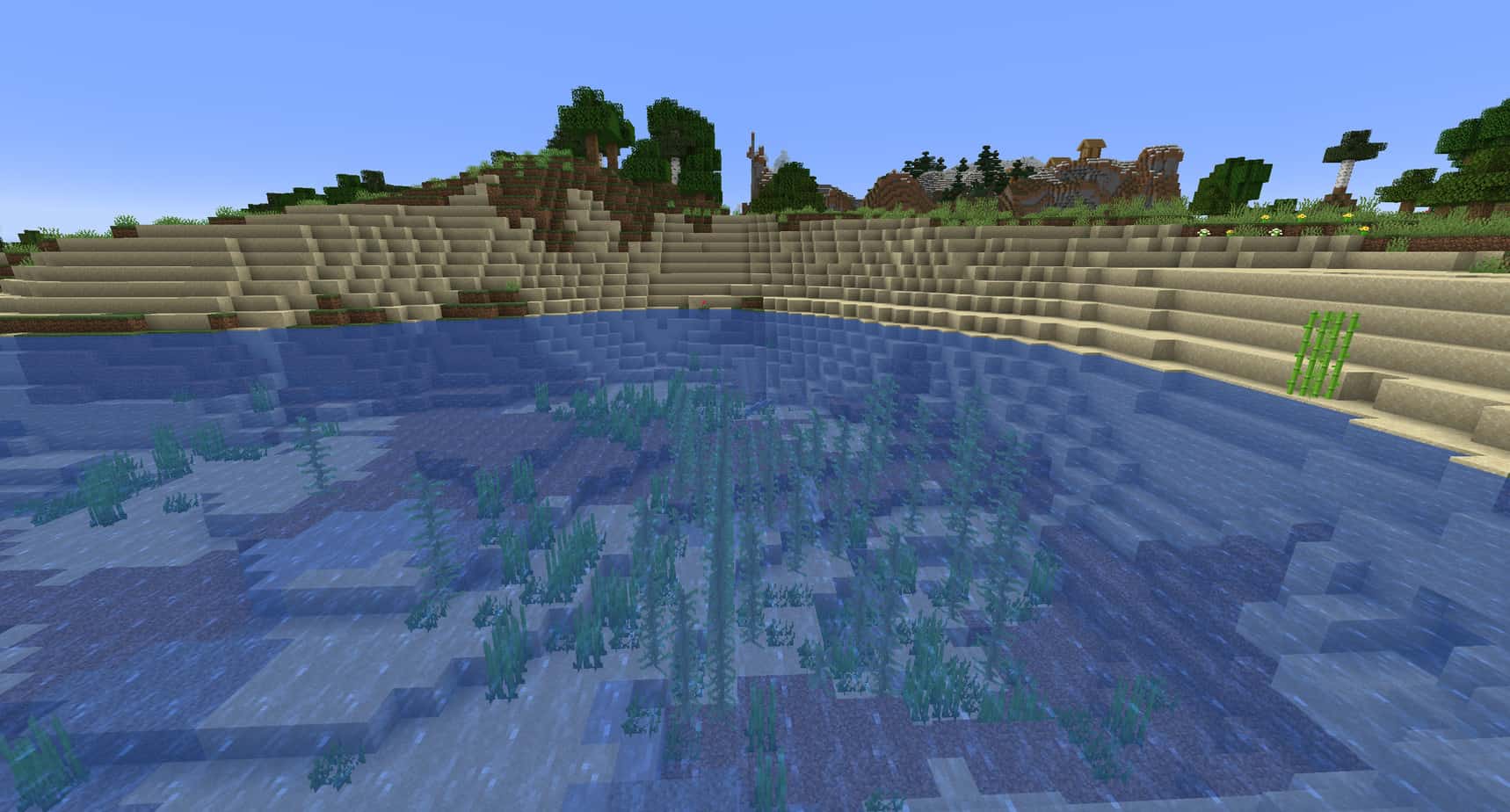 A beach is often formed when land meets the ocean. There is plenty of sand for making glass and sometimes buried treasure chests can be found under the sand. Rarely, shipwreck structures are found along beaches as well.

Turtles can only be found on the beach biome and their shells can be used to make defensive potions.

When spawning near mountain biomes and ocean biomes, a beach will show up as a “stone shore” instead. 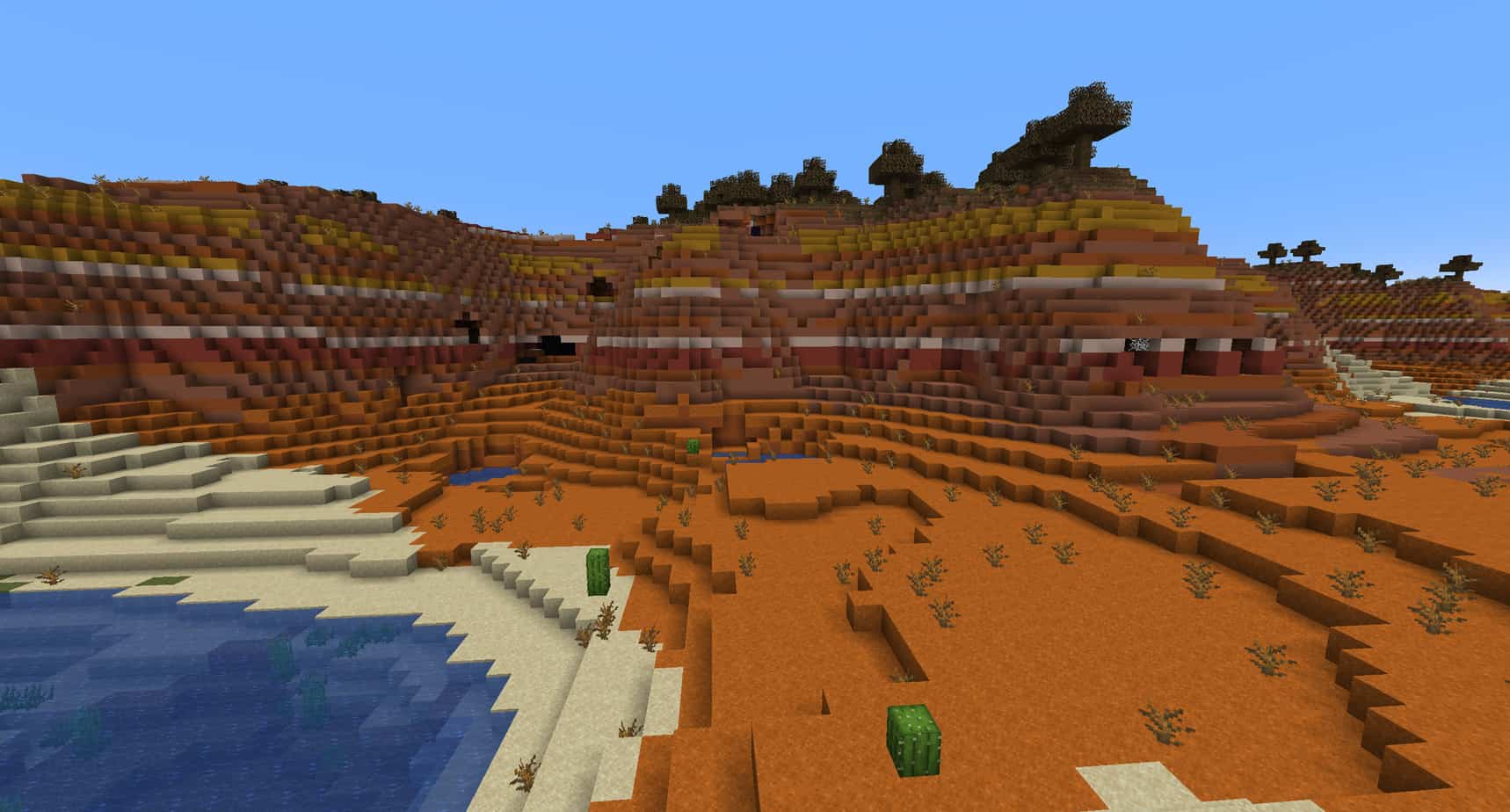 The badlands biome is fairly rare and sometimes I can play a whole run-through of Minecraft and never see one! They are basically deserts but with terracotta and red sand instead. This biome is particularly useful for mining terracotta and gold ore.

A unique part about badlands is that mineshaft structures are commonly found at ground-level instead of deep underground. This makes it quite easy to find minecart rails and treasure chests in this biome. Gold ore is also more abundant and you can find them in these mineshafts at higher than normal elevations. 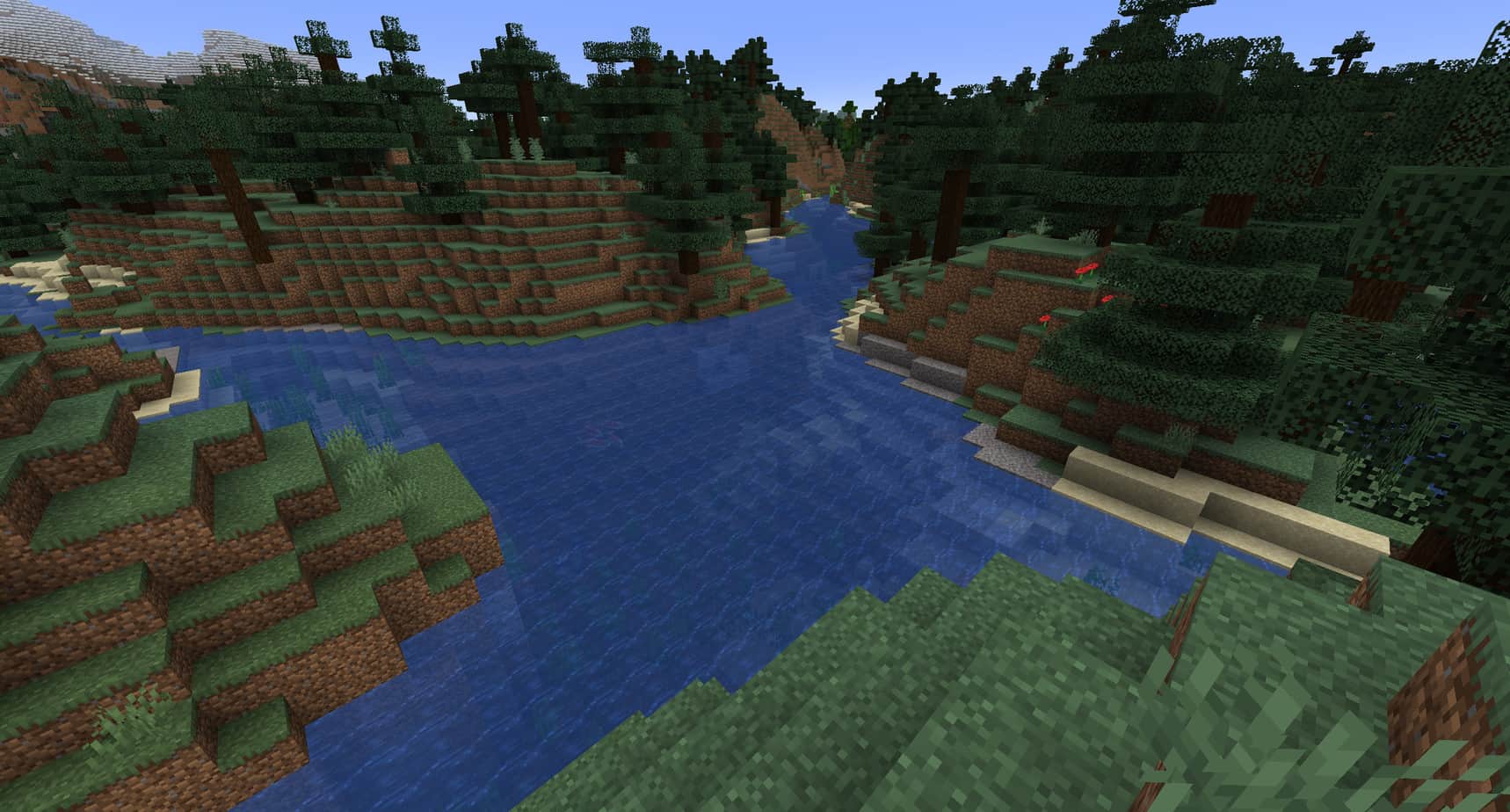 River biomes often form as a way to divide different biomes apart. For example, you may have a plains biome, then a river biome, then a forest on the other side. As these biomes are fairly small and just contain the river, they are not incredibly unique or large in size.

However, in a river you can still find some useful things and they are a great place to fish or build a bridge over. For example, in a river you may find fish like salmon without having to travel to the ocean or pockets of sand and clay.

When located near a colder biome like a snowy tundra, the river will be largely frozen and can be easily walked over. Oceans are among the largest Minecraft biomes in the game and have been heavily updated since the original release of the game. Oceans are best travelled by boat and are an easy way to scout for new biomes by zooming up the shoreline or across the entire ocean to new land. 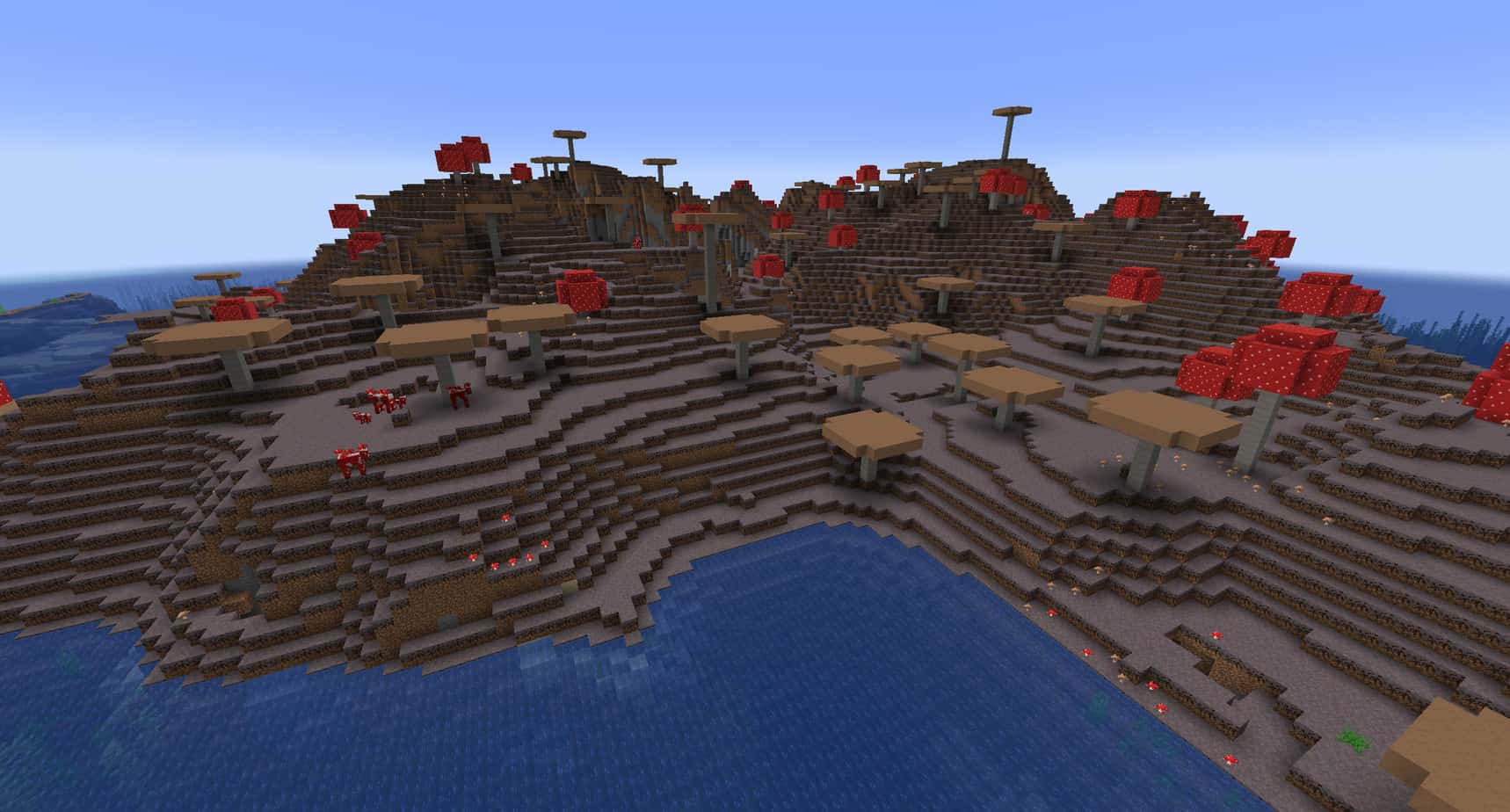 This is another rare biome which is possible to not commonly encounter while playing. This is the only biome where you will find mycelium which spawns instead of the regular grass blocks you see in other Minecraft biomes. Mycelium is useful as it lets you grow mushrooms at any light level, whereas mushrooms can normally only grow in darker lighting on other blocks.

Mushroom fields is also home to mooshrooms, a type of cow only found in this biome. Mooshrooms act similarly to cows and can be bred. The main difference is that they can produce mushroom stew when used with a bowl and they can be sheared into normal cows to yield mushrooms.