The wither is a boss added to Minecraft in 2012 as a part of the 1.4.2 “Pretty Scary Update”. The boss fight is generally more difficult than killing the Ender Dragon, and can be done in the main Overworld.

Withers are not naturally found in Minecraft and do not spawn like other mobs. In order to make a Wither in Minecraft, you must place three wither skeleton skulls on top of four soul sand blocks in an exact arrangement (see photo below).

Withers drop nether stars, which can be used to craft beacons. Beacons are special blocks that create a beam of light to the sky and provide status effects to nearby players. These status effects are extremely useful and include things such as faster mining, quicker movement speed, and rapid health regeneration. A beacon must be activated first by placing certain blocks (such as iron or diamond) underneath in a pyramid shape.

How To Spawn a Wither in Minecraft 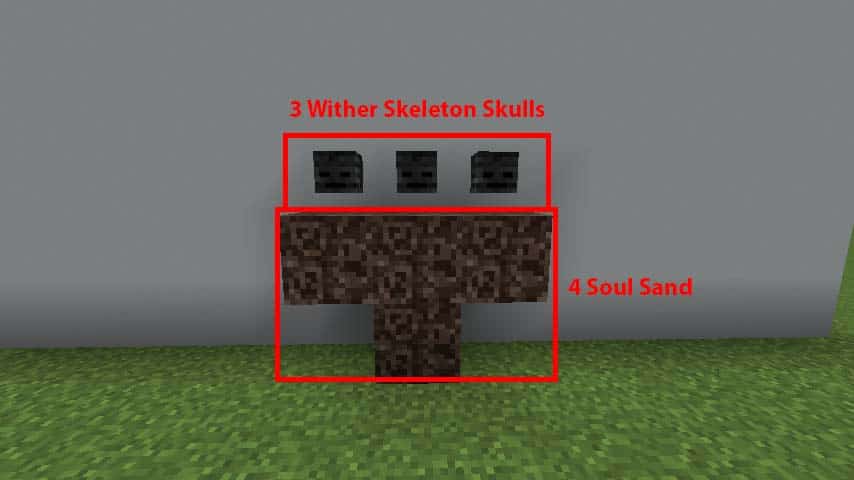 PHOTO: When you place four soul sand and three wither skeleton skulls in this exact arrangement, the Wither Boss will spawn.

How To Find a Nether Fortress in Minecraft

The easiest way to find a nether fortress in Minecraft is to run east or west in the nether, along the X coordinate. This is because nether fortresses spawn in strips going north and south, and if you go east or west you are much more likely to intersect one. Wither skeletons will only naturally spawn in Nether Fortresses, so finding one is the first step.

If this sounds confusing, we made a diagram to better explain this:

PHOTO: Nether Fortresses spawn in strips north to south along the Z coordinate. Therefore, if you go east or west (along the X coordinate), you are significantly more likely to find a Nether Fortress. If you go only north or south, you can go for thousands of blocks without finding a nether fortress!

How To Get Wither Skeleton Skulls

Once you find a nether fortress, you have the option of building a wither skeleton farm or simply running around and killing them as they spawn. If you are only looking for one or two beacons, it is probably most time efficient to simply run around the fortress and kill every skeleton you see until you have the three skulls.

Important Tip: The normal drop rate for wither skeleton skulls is very low, 2.5%. This means you would have to kill on average 40 wither skeletons for one skull. A sword with the Looting III enchant will increase this drop rate to 5.5% which is an over double increase. A looting III sword is strongly recommended!!

Regardless of whether you want to make a farm or not, it is important to understand the spawning rules for Wither Skeletons in Minecraft:

PHOTO: Modifying a nether fortress to increase wither skeleton spawning. Modifications include widening roads by 2 or 3 blocks and demolishing walls.

How to Kill The Wither

Congratulations on getting three wither skeleton skulls! You’re now ready to spawn the Wither. Follow these next steps and it will be a piece of cake.

I recommend bringing your best items when spawning the Wither. This includes:

The summoning area will need to be dug out deep underground, preferably a decent distance away from any of your buildings. This will contain the wither’s explosions to a smaller area and also prevent the wither from flying around. The spawn room should look like this photo:

Next, dig a long 2×1 tunnel and connect it to the spawn room (make sure it is well-lit with torches to stop mobs from spawning) as shown in the next photo:

The Wither will not be able to enter this tunnel as it is too large. It will be stuck in the initial room and then use explosions to break blocks and come closer to you. The length of the tunnel will depend on how strong your bow and sword are.

If you have enchanted weapons, then the fight will be very short and the tunnel doesn’t need to be very long. If you have just a plain unenchanted bow and sword, make the tunnel fairly long.

PHOTO: The Wither will spawn in the room once the skulls are placed.

When you are ready, place your three wither skeleton skulls on top of the soul sand. When the Wither is spawning, make sure you run away into the tunnel as it will create a powerful explosion. After the explosion, you will simply use your bow to hit the Wither with arrows from the tunnel. If you are far away enough, you will be able to continuously hit the boss with arrows and probably not even take any damage.

Once the Wither’s health is 50% (there will be an HP bar at the top of the screen), it will be immune to arrows. You must then get up-close and use your sword to attack the boss until it is dead. You will still be able to attack it inside of the tunnel, just try to keep the maximum distance possible.

When the Wither is dead, it has a 100% chance to drop the nether star.

How to Make a Beacon in Minecraft

PHOTO: Crafting recipe for a beacon (glass, obsidian, and a nether star).

You may now craft your beacon using the recipe as shown above! The recipe uses obsidian, glass, and one nether star.

Placing your beacon on the ground by itself will unfortunately not do anything. The beacon must be placed on a pyramid of “valuable” blocks obtained by mining with a completely unobstructed path to the sky above it (other than glass). The larger the pyramid underneath it, the more powerful the beacon will be.

These are the only blocks you can use for a beacon pyramid: iron blocks, gold blocks, diamond blocks, or emerald blocks. Lapis lazuli and redstone blocks do not work. Any combination of these blocks works, so for example you could use half iron and half gold if you wanted to.

The larger the beacon pyramid, the more powerful your beacon will be. There is no benefit to making a pyramid larger than 4 levels as this is the most powerful type. The following table summarizes beacon powers:

How to Change The Beacon Beam Color

The default color of the beacon beam is white. However, this color can be changed by passing the beam through stained glass. The beam color will be an average of all the successive colors it passes through. For example, if you pass the beam through red and blue stained glass as shown in the photo, you will get a purple beam.

For more information on different beacon color combinations in Minecraft, check out this photo.